Welcome to Our Overview of Plant Life at ThunderCroft

Please use this guide or the dropdown menus at the top of the page to assist you in appreciating all that we have to offer in the realm of plants.  Our 160 acres contains meadows as well as new and old growth forests, all of which are filled with interesting species of plant life.  As you scroll down the page, you will be given a brief overview of our offerings and will have the opportunity to navigate amongst a variety of pages designed to educate and enlighten you!  Enjoy! 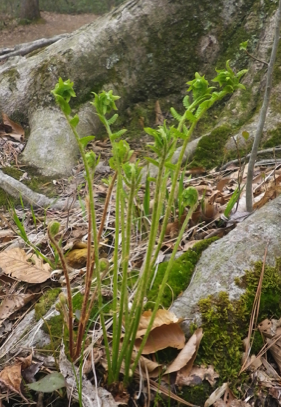 ...a fiddlehead fern in the forest...

ThunderCroft's physiographic location places it amongst some of the most beautiful and equally untamed habitat in all of the Commonwealth of Virginia.  Considered part of the Ridge and Valley Province of the southwestern section of the state, Thundercroft rests gracefully at over 2000 feet above sea level, safely flanked by mountain ranges to the east and to the west.  The climate is moderate with daily summer temperatures ranging in the 80's and daily winter temperatures dipping into the 30's.  Approximately 40 inches of rain and close to 30 inches of snow compromise the average for precipitation in the area.  The natural flora of this region boasts an extremely divergent array of native grasses, wildflowers, shrubs and trees.  As the ThunderCroft tract of land was once primarily an agricultural farm, great care has been taken to preserve the existing forests and reclaim and restore open pastures to complement the dwindling wild meadows that once dominated the mountainsides of this region.  Sheltering and conserving remaining native species as well as seeding the forest edges and meadows with native vegetation are paramount year round objectives of ThunderCroft.  Although spring is generally every visitor's favorite time of the year, Thundercroft's carefully maintained habitat continually offers an abundance of wildflowers ranging from the earliest spring emergers to those that flower and seed well into the first frost.