More than Just a University

The university itself spans gracefully over 2,600 acres, encompassing most of the town of Blacksburg.  The atmosphere is delightfully collegiate with numerous students living and working off campus.  Both Buck and Janet graduated from Virginia Tech and enjoy the diverse community offerings which include concerts, plays and a wide variety of educational opportunities.  Although their travels have taken them numerous places throughout the years, they have found the ultimate place to raise a family and set about the task of giving back to the community.

All of the athletic teams and players at Virginia Tech are officially members of the Atlantic Coast Conference; however, they are most affectionately known as "Hokies."  Sports are year round at Tech an include football, baseball, softball, baseball, lacrosse, diving, track ad field, wrestling, volleyball and golf!  Buck and Janet always invite visitors to join them in supporting the nation's finest students as well as athletes.  While meandering about the campus, we also urge our visitors to take note of the gracious architecture, most of which is adorned with "dolomite," a stone mined in Southwestern Virginia--more affectionately known as, "Hokie Stone!"  In 1965, a section of "Hokie Stone" was placed in the field tunnel at Lane Stadium and is traditionally touched by every player entering the field!

Click here to explore all that Virginia Tech has to offer! 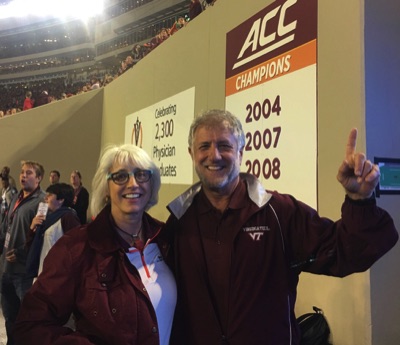 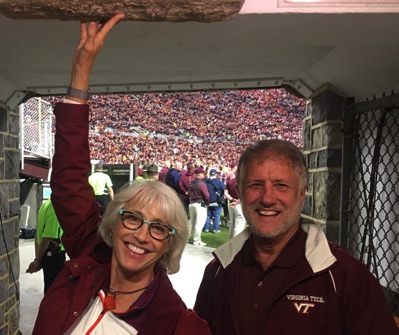 Numerous opportunities for adventure and entertainment find their roots in the quaint small town setting of Blacksburg, Virginia and in particular, around the enormous community of Virginia Tech.  The University is a public land-grant university offering a top notch educational experience within the financial reach of numerous students across the state as well as the country.  The educational programs currently offer 280 graduate and undergraduate programs to well over 30,000 students.

Buck and Janet showing their support!