While clearing brush as part of our Habitat Improvement Program, groundskeeper Leon Caldwell stumbled upon a small opening in the ground which led to a previously undiscovered amazing underground network of tunnels and caverns.  Hidden deep below the meadows and fields above, Thunder Cave is certainly the oldest and most interesting feature of  the ThunderCroft landscape.  Caves are familiar features for this region of the state, known specifically as The Mount Tabor Karst Sinkhole Plain in Montgomery County, Virginia.  Over the past 240 million years, rainwater and groundwater  laced with carbonic acid has been gradually seeping through faults and cracks in the mountainous terrain, carving out a beautiful subterranean landscape below.

Shortly after the cave's discovery, Landowner Buck Cox enlisted the help of Wil Orndorff, a state expert in Karst Cave Formations with the Virginia Department of Conservation and Recreation.  Together with the Virginia Tech Cave Club, they made their  maiden descent into Thunder Cave.  The discoveries made that day fit together the missing pieces of the overall geological story of the ThunderCroft track of land.

Brief Geological History of the Ridge and Valley Region

Modern day ThunderCroft sits atop a mountain ridge that experienced its birth some 460 million years ago during this region's first orogeny, or "mountain building event."  Numerous tectonic events occurred over the course of the next several hundred million years, creating the various mountain ridges and valleys of present day Southwestern Virginia.  Geologists best describe the physical topography of this area as that of a "karst" region that is littered with sinkholes and caves.  The limestone within karst was deposited by living organisms in an ancient sea over millions and millions of years. The organisms responsible have carbonate skeletons within their structure that slowly but surely build layer after tiny layer of, primarily, calcium carbonate as they die and fall to the bottom of the sea.  This occurred withn the present day formations were located a few thousand miles south, down around the equator.  For millions of years, cave formation in Virginia have followed a well known pattern of chemical weathering as acidic rainwater has continued to seep through limestone, etching out a unique subterranean network.  Virginia boasts over 4,000 identified caves with the majority resting west of the Blue Ridge Mountains.

Geologically speaking, Thunder Cave is classified as a "living cave" with active water seepage and the on-going formation of geological structures.  As of 2018, scientists and local cave enthusiasts have mapped out over 1,000 lateral feet of cave passage with the deepest known open cavern resting at roughly 80 feet below the earth's surface.   As the initial descent is quite steep, professional grade rapelling gear is needed to descend through three consecutive steep vertical passages which lead to the first main cavern below.  What follows is an extensive network of damp lateral passages, completely devoid of ambient light, yet filled with a symphony of geological features.

The subterranean temperature at depth remains constant and averages around 58 degrees Fahrenheit.  Once inside the cave and with the help of illuminating head lamps and lanterns, one can see a wide array of geological formations called speleothems.  The smallest structures are tiny downward growing "soda straws" which eventually form "stalactites" as well as their opposing upwards growing "stalagmites."  In some places, the stalactites and stalagmites have met in perfect opposition to one another and have matured into solid "columnar" structures.  Throughout the passages and open caverns, water continues to trickle through the limestone forming  free standing "rim pools" and very slippery surfaces.

Of particular interest in Thunder Cave are the large "flowstone draperies" formed as dissolved calcite and other minerals flow out of solution and cling to the various wall formations in the cave.  In several places, the draperies have a unique pronounced 'bacon-like' pattern, formed by varying degrees of acid in the flowstone solution over time.  Thunder Cave is currently a wildlife conservation project site, with scientists monitoring for the presence of endangered and threatened species.  Current research is based around sensitive isopod and amphipods such as Vandel's Cave Isopod.  Recently collected samples have been sent to laboratories in France for DNA analysis and species confirmation.  Thunder Cave also boasts towering layers of stromatolites, some of Earth's oldest members of the fossil record. Dating back as early as 300,000 to 500,000 million years ago, cyanobacteria accumulated in layered mats which remain as fossilized structures deep within the recesses of the cave.  As Thunder Cave's total expanse and structural integrity is still being explored and mapped, access at this time is strictly reserved for professional scientific study of this genre.

Layers of fossilized stromatolites line the walls of the cave 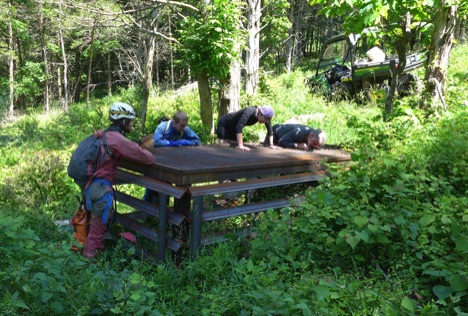 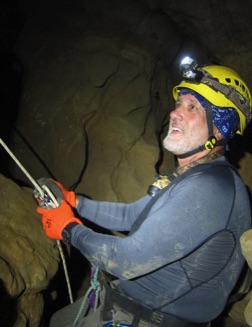 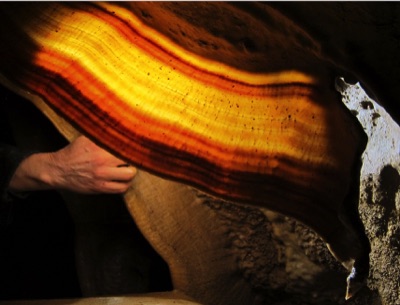 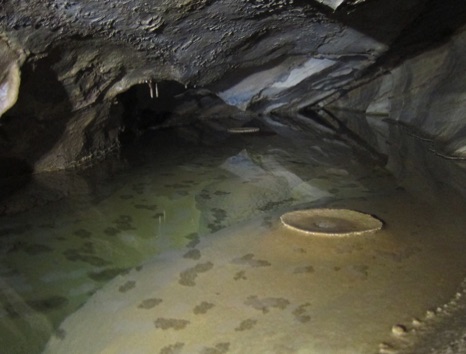 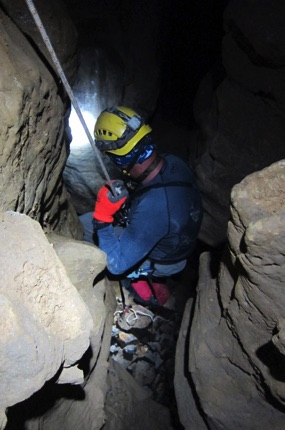