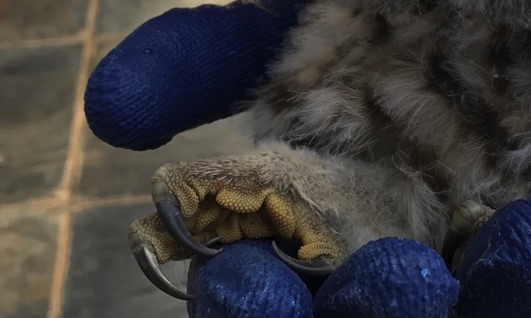 Even as a fledgling, this young owl's talons are evidence of a very strong and deadly predator 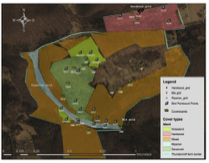 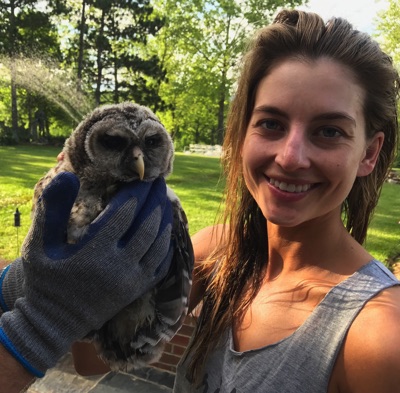 Of the known 175 species of birds in this region, ThunderCroft is also home to several of Virginia's 8 species of Owls.  They are solitary birds who prey upon small mammals, reptiles, amphibians and insects that they catch with their sharp talons.  As children, most of us believed that these elusive birds of prey could actually turn their heads completely around, thus giving them somewhat of a supernatural quality in our young minds.  We were not that far off and in fact, with their ability to have extreme flexibility in their head and neck region, they are capable of rotating their heads to span a 270 degree visual field.   Although their hearing is superior to most creatures in the animal kingdom, their ability to focus on objects at close range is fairly limited.  Instead, their eyes are constructed in a way that is much different than most other animals of prey.  Foxes, coyotes, and bears all have eyes that rotate in a snug socket in their skulls, allowing them to look in different directions simply by rotating their eyes and keeping their heads perfectly still.  The owl's eyes are structured in an opposite arrangement with them being placed at the end of long tubes, requiring them to actually move their heads to direct their field of vision.  The extremely large size of the eyeball itself allows them to take better advantage of low light settings.  In particular, their distance vision is extremely acute.  Combine this with their excellent sense of hearing and they become the marksmen of the nocturnal hunting world.

Perhaps one of the most interesting features of owls can be found on their feet.  All owl species have four toes designed for grasping prey.  At the terminal point of each toe is a razor sharp talon designed for penetrating their prey and often delivering a lethal puncture.  One fascinating feature is an owls ability to remain in a perching, clutching and grasping position with relatively little effort.  Their toes are physiologically designed to remain "locked in place" once engaged, making a prey's escape virtually impossible.

We have included informational links below about the 4 identified species who make their homes at ThunderCroft.